CATCH returned to Cuenca, Ecuador in early February in order to expand our CATCH program there from 7 to 28 schools! Trainers Kathy Chichester (Flaghouse, Inc) and Julio Araiza (Los Fresnos CISD) traveled to Cuenca with the full support of their ministry of education.

CATCH’s expansion follows on the heels of a successful Phase 1. Read a report on Phase 1 and plans for our expansion here!

Below we have a slideshow from our travels and a blog entry penned by our Cuenca liaison, Rose Jennings! 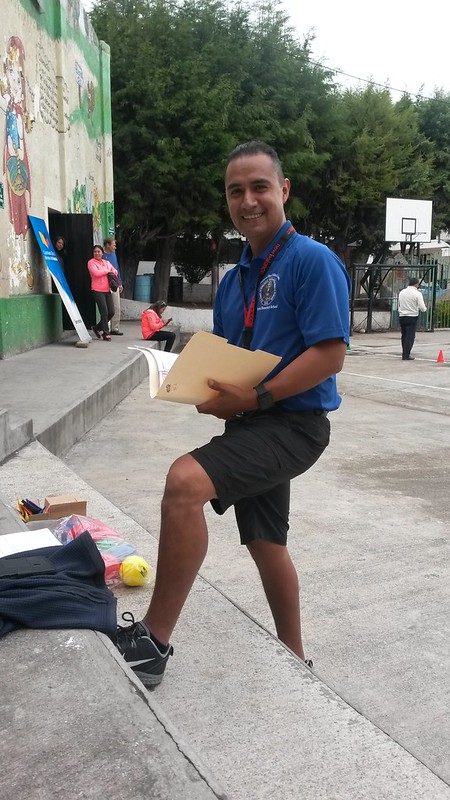 From Rose Jennings, CATCH’s Liaison representing us in Cuenca, Ecuador I have spent the last week and a half walking through the streets of Cuenca, Ecuador, smelling the heavenly wafts of freshly baked bread around every corner, passing the small hole-in-the-wall shops with young mothers – babies strapped to their backs – selling chorriados (thick corn tortillas with soft cheese on top), roasted mote (hominy), fried sweet plantains or pork skins simmering in juices. What I’ve become aware of here is the abundance and access the population has to salty, sweet, high fat snacks. The energy balance lies in the walking I have been doing every day – up to 7 miles a day some days these past few weeks. Cuenca is a very walkable city. Four rivers cross through this mountain valley city on the way to the jungle. The city takes pride in these patches of green and has put lots of care in the trails along the way where runners and walkers frequent. Sidewalks, albeit narrow, are everywhere in the city, and it is hilly so you get your workout quickly. From what I’ve seen there is also a culture of working out in gyms, crossfit, martial arts, and plenty of pick-up soccer in the parks.

I come ready to gather more information about the determinants of health in this city and country. The National Health and Nutrition Report from 2012 (Freire, et al), based on a sample of 19,949 houses and 92,502 people, informed us that obesity and overweight is rising quickly in Ecuador (27% for 12-14 year olds and 24.4% for 15-19 year olds; 28.8% among girls and 23.3% among boys), and that diabetes is the number one chronic disease here. We know that this disease is for the most part is caused by improper energy balance, which a proper diet, rich in fruits, vegetables and whole grains can treat and prevent.

In the providence of Azuay, where Cuenca sits, these numbers are even worse, the rate of overweight/obesity among adolescents 12-19 (34.4%) surpassing the States. Alongside this is the double problem of malnutrition – with almost 20% of the population between 12-19 had stunted growth in 2012. These numbers are followed by what appears to be an exploding national interest in research and prevention. My third day here, my ambitious and passionate supervisors, Mike Weber (director of the Cuenca CATCH pilot) and Mark Odenwelder (director of CEDEI) sent me off to attend a symposium in nutrition, physical activity and public health at La Universidad de Cuenca to network, fact-find and promote the word about our project. Which leads me to the reason I am here in Cuenca – to serve as a liaison to a CATCH pilot program that has emerged as a result from collaborating institutions here on the ground in Cuenca – Centers for InterAmerican Studies Foundation (CEDEI) and the Ministry of Education.

The project began with conversations in the spring of 2014 and quickly moved into implementation in the fall with a pilot in the 6th grade (septimo grado) in 7 schools. Read more about this phase here. This spring we begin with our second phase of the pilot project. Another write-up in Spanish about this here: My fast and furious week of assimilation the Cuencan culture preceded our 3-day training for 27 schools in the City of Cuenca, Ecuador. We had an amazing turnout. In total, I think over 100 school directors, PE teachers, and classroom teachers attended our training. For the most part, people left with smiling faces and high fives ready to help their students lead healthier lives through CATCH programing. We had a diverse and talented group of trainers amongst us. One of my favorite moments was watching peoples eyes wide open as they watched Susan Burke March, a well known nutritionist and resident of Cuenca for over two years, measure out the number of teaspoons of sugar in one of the most popular “sports” drinks here in Cuenca. Then there was Coach Julio Ariaza, getting everyone to run around and dance funny dances on the pavement, and jump for joy to get their heart rates up.

In response to an enthusiastic desire to implement CATCH in the 7 schools in the first phase, a CATCH physical activity and nutrition curriculum was put together from existing materials and translated. In response to feedback from schools, it was decided to move one level up in the curriculum and a new set of materials had to be translated for the second phase, in which we would include 27 schools. Feedback from the teachers in phase 1 helped us learn about many foods that should be added and subtracted to our “GO-SLOW-WHOA” list. “Where is the rice!?” one person shouted at one point in the training. And another, “Que es hummus?” Some common 3-star breakfasts were not yet listed in our workbooks – like Motepito (hominy porridge with egg and milk) with fruit on the side.

The qualitative commentary from this training was also very informative. One woman shared her concern with the snack bars in the schools. She felt that it was very important that we do a special training for the bar ladies because this is where is where the problem is. Another young teacher shared his concern with teaching the children in his school, the majority with broken families, these concepts, when most of them either don’t have a lot of supervision or choice in their limited supply of food at home. He also had concerns about how to change some major customs overnight – such as eating three different carbohydrates in one meal and consuming lots of sugar. What I/we emphasized it starts with access (for the families), awareness and education for the students and parents.

Education is empowerment. The model that CATCH emphasizes is about forming healthy habits for life, making healthy fun, and changing the environment around us to support healthier lifestyles full of movement and healthy eating. Making the healthy choice the easy choice!